Barry continues to vow he will change the future and prevent Iris’ death. But at what cost? Find out in The Flash Dead Or Alive.

Barry Doesn’t Give Up

Barry continues to vow he will change the future and prevent Iris’ death. But at what cost. Now the entire team knows what they are fighting against, so there is teamwork in play. And someone is hunting HR, but for what purpose. 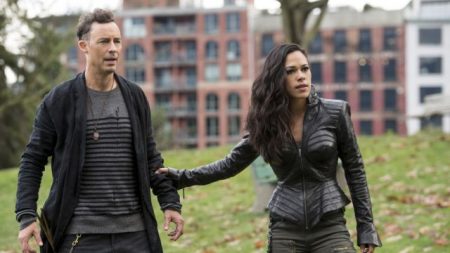 Cisco finds HR dicatating a new story about fighting crime, while Barry and Wally rescue a bus full of cheerleaders, while stopping the latest gang of bad guys. This gang had procured some new high-tech weaponry, thats not on the market yet. Iris has heard rumors of such an arms dealer being in Central City, and was hoping Barry had seen who this was.

Team Flash To The Rescue

Julian, Cisco and Caitlin have laid out a display of the events in Barry’s vision. Now that everyone can visualize what needs to be done, everyone can pitch in on the investigation. Julian’s particular contribution is mathematics, which helps in determining speed information. His notes are less than positive, but the speedster needs to know what he’s up against.

We learn our HR hunter is less than kind. She breaks into Jitters, knowing that HR had been there recently. And if time/universe hopping isn’t enough of a challenge, we know she is a meta, presenting even more difficulties. Though hers are more than the typical villians we’ve seen as of late. I can’t wait to learn more about who she really is.

Before the cops, Barry, or even Team Flash can enter our new meta in the database to see if she’s registered, she shows up on STAR Labs’ security cameras. She’s calling HR out, and she’s not wasting any time. Unbelievably however, HR knows not only who she is, he knows what she is and what she wants.

Her power is unrivaled in our current standings, knocking out HR, putting Cisco on the ground in seconds, even halting, even repelling Wally in speed mode! This girl is no slouch. Gypsy is here to return HR to his Earth to face charges of illegal universe hopping.

Meanwhile, Iris is up to no good. While telling people otherwise, she is refusing to drop her latest scoop on the arms dealer. Even going so far as to guilting Wally into a ‘brother-sister crime-fighting’ team again. Knowing when she is supposed to die, is making this reporter swing for the fences.

Related Article:  Ash vs The Evil Dead to premier in over 100 countries this Saturday

HR lets slip that he was not content in his role on his planet, which is why he fled, risking everything, including his life. He manages to tell Barry and Cisco that the only way that he can get out of this return to his Earth, is if he (or someone on his behalf) issues a trial by combat. Once Gypsy returns for HR’s surrender, Cisco issues the challenge before Barry has the opportunity.

Wally and Iris nab some information from Joe’s desk, and track down the arms dealer by themselves. Go brother-sister. Wally runs off to do a quick recon, and Iris heads into a warehouse alone. They are able to locate the dealer, and Joe is less than happy about their stunt. Joe is beginning to piece together that something is going on with Iris, but does not know about the future shown by Savitar. 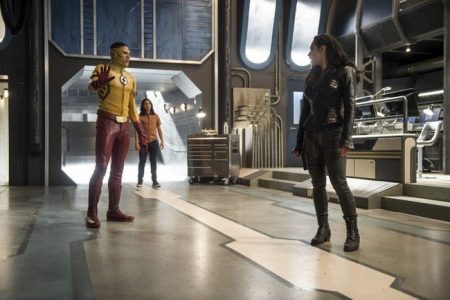 Cisco has been training and Julian as been studying, now comes the time to put it all to the test: a Gypsy vs Vibe showdown. Not suprisingly, Gypsy blindsides Vibe with her powers, while Vibe was enquiring how they should proceed. They match powers, before heading off into a multi-dimensional battle. Some familiar places such as Earth-2 and even the offices of CatCo Media. It takes Gypsy revealing her insight into Vibe, to show him that he is capable of more than he realizes.

Tune in to find out how the showdown ends, and the agreement they came to regarding the life of HR Wells. Cisco and HR share some kind words after surviving a difficult day, and Barry shares some daunting information with Wally regarding his speed.

Team Flash is now working together on more than one cause. Wally’s powers continue to impress, and he’s beginning to really feel at home with them. Barry is maturing some, realizing that not every solution requires him to be the answer: he lets Wally take credit for the rescue involving the cheerleaders, and includes Julian in the recent investigations. These moves are not easy to make, but once you are able to open things up like this, its all for the better. I really like the way that, while the show is named The Flash, it really is beginning to encompass the team as a unit. I look forward to great stories in the future.