Last time, Savitar was able to trick Wally into releasing him from the Speed Force, and wound up taking his place. Find how the team will save him in The Flash Into The Speed Force.
If you haven’t kept up with our Flash coverage so far, you can find that here.

Barry is reeling in self guilt since Savitar took Wally away from the team. The Flashpoint event happened because of Barry, and now everyone’s lives has been negatively effected. Feeling responsible, Barry wants to make sure that no one else suffers anything more. He is going back into the speed force, to rescue Wally. 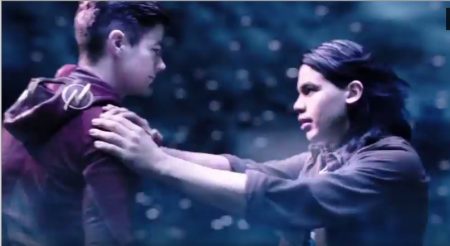 Everyone thinks Barry is crazy, but they have no worthwhile alternatives. As they begin to digest what is being proposed, they come up with a tether, of sorts, which will keep Barry linked to Star Labs, so he has a lifeline in case things go awry. Emotions are running high here, as they have lost one teammate, and now a second is running headfirst into danger, with hopes of rescuing the first.

Jesse wants to go with, but she has to stay and be available if the city needs saving. Joe and Iris are nervous for both Barry and Wally’s safety. Julian is clueless as to what is about to occur, and Cisco and Caitlin are trying to keep everyone from falling apart.
Cisco drops Barry off in what appears to be the middle of a windstorm. This is the gateway to the speed force.

Barry finds himself in a the Central City Police Department amidst a storm. He finds not Wally, but Eddie Thawne, a detective that went missing in Season One. Eddie is the manifestation of the speed force, telling Barry that the speed force will not be as cooperative as he once experienced. Barry lied to them, they will not make the same mistake twice. Cisco is not exactly in the same place as Barry and Eddie, but rather in a ‘prison’ of sorts, that future Barry fashioned.

Rather than sitting idly by waiting for something to go wrong, Jesse is trying to get Cisco to isolate Savitar’s location. Cisco doesn’t love the idea, telling Jesse they need to wait for Barry, and puts the search on hold.
Eddie shows Barry what Eddie Thawne’s life was supposed to be like, versus what it actually became. They level with one another, with Barry convincing Eddie that rescuing Wally is the only reason he is here. Eddie tells Barry where the exit is, though there is quite a condition attached: he has to outrun a time wraith in order to get there. 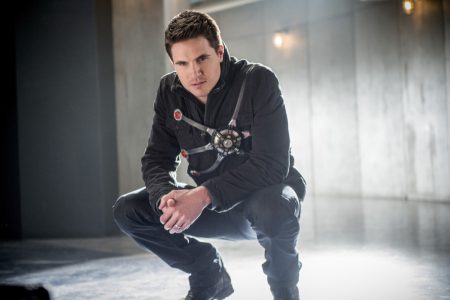 Barry gets past the wraith, and finds himself in a different area. Barry is being shown the differing realities of what could have been, this time witnessing Caitlin and Ronnie in the lab, with a child. Ronnie tells Barry that the hell Wally is in, is all his own, and not for Barry to replace.
True to form, Barry is unwilling to accept that answer. He is met with a Black Flash battle for his loyalty. Like a trial worthy of Buddhist reflection, the only way Barry can free Wally, is by freeing himself. Barry sacrifices his tether to defeat the Black Flash. 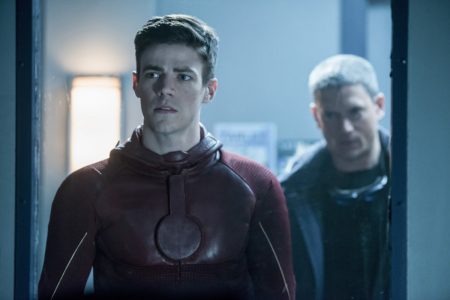 Barry awakes with Ronnie and the Black Flash gone. He finds Wally on the other side of an office door, but before he can open the door, Leonard Snart (Captain Cold) freezes the door shut. Wally is trapped in an endless loop of witnessing his mother die. Over and over again.

Barry continues to be denied to take his place. Snart has to explain why he was willing to sacrifice himself when he died. How Barry was responsible for it. Just as Snart freezes Barry to the wall, Jay Garrick, the original Flash, comes to the rescue.
Jesse runs off with the shard of Savitar’s armor, hoping it will lead her to find him. Jesse comes face to face with the speed god, with only HR on the coms. HR and Jesse realize a ‘god’ shouldn’t need armor, and that he has a weakness. Jesse stabs Savitar with his shard, and sends him running to fight another day.
Cisco sent Jay in after Barry, once they had lost contact. Though Snart disagrees with this plan, and sends Jay down with a freeze blast as well. Barry deflects the blast, and disarms Cold. Barry declares that he and Jay are taking Wally with them, which Cold says he is unable to do. Flash issues the challenge, ‘try and stop me.’

Related Article:  The World According to Iron Man (Book) Review

Jay informs Barry that he is to be the speedster that takes Wally’s place. Barry claims his presence here is only temporary, he will break Jay back out.

Barry and Wally both reappear inside the breach room in Star Labs. Barry has brought his buddy back from being trapped inside the speed force. Though the rescue is bittersweet, knowing they had to abandon an ally inside, in order to return another to Earth.
Wally and Jesse are licking their wounds and talking about battling Savitar, when Jesse tells him that she won’t face him on this Earth for a while. Jesse is going to Earth-3 to fill in for Jay as the Flash, at least for a while.

After Jesse says her goodbyes, HR informs the team that their friend Jesse uncovered a small detail about their nemesis: Savitar can feel pain. Underneath that armor, Savitar is a man.

Barry has learned that he needs to embrace things as they are in order to defeat Savitar and move forward. However, as part of this, he and Iris need some time apart.