One of the more non-superhero-y book in the Valiant Comics stable, Dr. Mirage is about to get a new lease on life with the mini-series The Death-Defying Dr. Mirage: Second Lives. 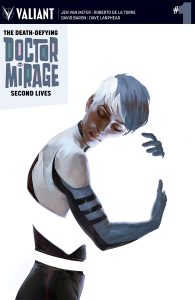 Occult investigators Shan and Hwen Mirage lived their lives in the thrall of an epic love that few will ever have…until Hwen died tragically before his time. Now, after a perilous trip through the underworld, Shan and Hwen have been reunited…but Hwen is still an intangible spirit of the dead – incapable of opening a spell-book or even touching his wife.

Their options exhausted, the Doctors Mirage are about to enact a dangerous spell to restore Hwen’s solid form…and grant his ghost a second life. But, in the wrong hands, their ancient rite will become a tool of terror – and unleash a force of pure, homicidal evil that lusts for the murder of the living and the dead… a torturous death that obliterates not just everything a person ever had in this world, but everything their ghost will be in the next!

Shan Mirage has come a long way from her start as a guest character in Shadowman, and with the resurgence of all things mystic in the Valiant U (Book of Death, Operation Deadside), she’s about to take center stage with her second limited series. This time of course, she may or may not be reuniting with the other Doc Mirage – her husband Hwen.

This is a smaller story than what Valiant’s been telling as of late in their comic universe, and it’s one that looks like it’ll have ten times the heart of bigger and more bombastic tales. That’s not to say that there won’t be action here, as it certainly sounds like there will be some supernatural horror to be dealt with. And just in time for Christmas!

The Death-Defying Dr. Mirage: Second Lives kicks off with issue #1 (of 4) this December the 23rd from the team of Jen Van Meter and Roberto De La Torre.

Valiant’s newest crossover may prove deadly for its biggest characters