The Guardians of the Galaxy are back! No, I mean the original Guardians. In a brand new series from Marvel. Oh, just click through and you’ll see. 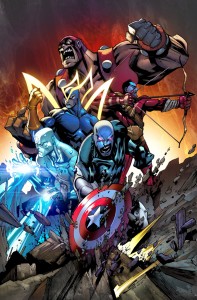 Because YOU demanded it! This October, blast off into the far unknown and the future of the Marvel Universe for GUARDIANS 3000 – an explosive new series starring the original Guardians of the Galaxy! From the mind of critically acclaimed writer and iconic Guardians of the Galaxy scribe Dan Abnett and fan-favorite artist Gerardo Sandoval comes a high-octane new series starring the team that started it all!

Perfect for new and old readers alike, GUARDIANS 3000 is set to reintroduce the original team to the Marvel Universe in a big way! With a new mission, Vance Astro, Yondu, Starhawk, Martinex and Charlie-27 are back and better than ever. Follow this cast of bombastic freedom fighters as they battle to gain control of the galaxy back from the hostile alien armies of the Badoon!

“Guardians 3000 is truly a case of you asked for it, we delivered!,” says Marvel Executive Editor Mike Marts. “Readers have been begging for the return of the original Guardians team for a long time…and we’re happy to debut this series right in the midst of Marvel’s Guardians of the Galaxy movie excitement!”

But the Brotherhood of the Badoon are just the tip of the iceberg. The Marvel Universe of the 31st Century is a hostile and unforgiving place – with both new & classic foes from throughout Marvel history. A new threat has emerged disrupting the timestream in the past and the present, and it’s up to the original Guardians of the Galaxy to prevent the collapse of all reality! But to save the future, one must look to the past – and the discovery of a mysterious young girl named Geena Drake could hold the key to saving all reality…or destroying it!

What does the future hold? When the dust clears, will there still be a future worth fighting for? Find out as Dan Abnett and the original Guardians of the Galaxy make their triumphant return to the Marvel fold this October when the senses shattering first issue of GUARDIANS 3000 hits comic shops and digital devices!

See now? The original Guardians, like, from 1969 original. A very different team than the one that was brought together after the Annihilation crossover a few years back, this version of the GotG first cropped up in the ’60s and featured a cast of names that you’re probably familiar with from one corner of the Marvel U or another. They also were of another branch of Marvel’s multiverse in that they hailed from Earth-691 in an alternate timeline.

Last seen in their own  standalone book in the early 1990s, this team hasn’t seen the light of day since guest appearing in the modes GotG comic in 2010. Here that are though, ready to ride the wave of Guardians of the Galaxy fervor brought about by the new film.

It seems as though they’re no longer separate, but a part of the modern Marvel U too, just set int he far future. It’s an interesting idea that publishers have played around with before with mixed results. With the interest in Guardians right now though, and the Marvel Universe of the future taking a bigger role in general in the Marvel of today, it just might be the right time for a Guardians 3000 rebirth.

See what happens when the book debuts this October from the team of Dan Abnett and Gerardo Sandoval.

Divinity: Original Sin II on the way to consoles this August

2014 was a bad, bad year for original IP’s on Metacritic

Darksiders return with a new view on the apocalypse