Picking up the numbering of the now ended series that starred Otto Octavius (Doc Ock) as he mind-possessed Spider-Man, the Superior Spider-Man #32 has a very interesting web to weave. 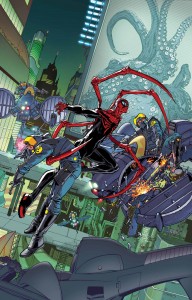 You just can’t keep Otto Octavius down! Today, Marvel is proud to present your first look at July’s SUPERIOR SPIDER-MAN #32 from the blockbuster creative team of Dan Slott, Christos Gage, Giuseppe Camuncoli and Adam Kubert! Be there when the fan-favorite series that took the industry by storm returns for not one, but two issues kicking off the Edge of Spider-Verse – the exciting lead-up to November’s explosive Spider-Man event featuring ever Spider-Man in history!  But how is the Superior Spider-Man still around? Find out for yourself as the Superior Spider-Man finds himself trapped in the year 2099 with no way home! Stranded in an unknown future, he’ll unearth a mystery that will have fans on the edge of their seat and guessing until the release of Spider-Verse in November!

How was Otto flung into the future? How will he return? And what happened while he was there? Find out as the blockbuster series that kept fans talking until the very end returns for a senses-shattering encore this fall in SUPERIOR SPIDER-MAN#32!

Since Otto isn’t Spidey anymore and we already know that Peter Parker’s version of Spider-Man is set to star in Spider-Verse, it looks like issue #32 of Superior is set during Otto’s original run as the character. He also crossed over quite a bit with the Spidey of 2099, so the setting more or less fits.

Just what he’s doing in the semi-far future and how he got there though, is a mystery. Also still a question mark is just how his time-hopping escapades lead into the upcoming Spider-Verse event. It figures Otto’d leave one more major pain for Pete to clean up.

Superior Spider-Man #32 arrives on August 6th from Marvel and the writing team of Dan Slott and Christos Gage, with the pencils of Giuseppe Camuncoli and Adam Kubert.

Dr. Strange returns to a monthly series this Fall from Marvel

The Amazing Spider-Man returns this April