Fans of AMC’s The Walking Dead  show should be happy to learn that Activision and Terminal Reality’s upcoming game will pack some star credentials. 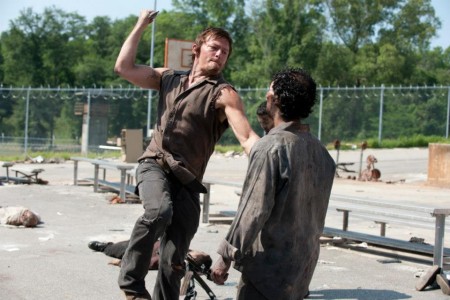 The Walking Dead: Survival Instinct stars the backwoods brothers, Daryl and Merle Dixon. On the show, the pair are played by Norman Reedus and Michael Rooker- and that’ll hold true for the game as well.

In the game, players assume the role of the mysterious, crossbow-wielding survivor Daryl

Dixon. This first-person survival title takes place within the universe of “The Walking Dead” and before the events of the AMC show, following Daryl and his brother Merle on a gruesome journey to reach the supposed safety of Atlanta as the world around them ends. Reedus and Rooker will bring life to their characters’ desperate, unforgiving struggle against limited resources, the nightmarish walkers and, perhaps, their fellow survivors…

Bar the doors and board up the windows because The Walking Dead: Survival Instinct will be creeping onto the Xbox 360, Ps3, and PC some time next year.

Ready to dig into some more multiplayer content for Activision’s Modern Warfare rebirth? Well your …

Reedus & Rooker take us behind the scenes on The Walking Dead: Survival Instinct