There really isn’t much else to say about the latest offering from the Robert Kirkman created television show. When the show left off after episode eight in early December, comic audiences had an inkling of what was about to happen: They got it when 609 aired last night. 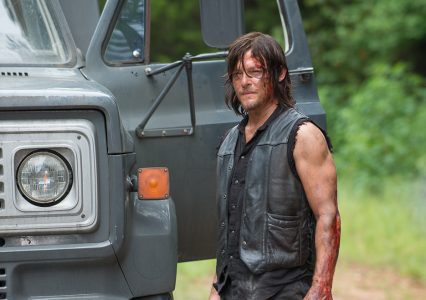 The show opened on Daryl, Sasha, and Abraham making their way back to Alexandria after leading some of the herd away from town. Stopped by a band of Saviors, our group learns that someone named Negan is not to be screwed with. At asking the leader who Negan is, Abraham is nearly shot dead. Before he can get a chance, though, Daryl returns from the back of the truck, with a rocket launcher, and quickly blows the oppressors away. So begins the, arguably, best episode the long running show has seen to date.

Meanwhile, the residents of Alexandria are trying to deal with the massive herd, pouring through the streets of the town. Rick, Carl, Ron, Sam, Jessie, Michonne, and Gabriel daisy chained along, until Sam let his inner cowardice show and froze. Moments later, he gets chomped into like that burger I had at The Cheesecake Factory. Delicious. Freezing, Jessie began screaming at the sight of her son turning into ground beef. Jessie gets swarmed but refuses to let go of Carl. Rick sees this as an opportunity to be the ultimate bad ass, and chops her arm with his hatchet.

Almost making it to safety, Ron decides that its time for him to get revenge for his abusive father and takes aim at Rick with his sidearm. Michonne takes him out before he can pull the trigger. The gun goes off after he gets stabbed though, and hits Carl right in the face. Carl gets his iconic “Dad..?” line, before falling unconscious.

Cue Rick and Michonne breaking rank and hauling ass to the infirmary, where Denise just returned. That’s petty lucky. The rest of the episode was as action packed as you could possible want. Enid and Glenn saved Maggie, only by being saved by Daryl, Sasha, and Abraham. Alexandria unified against the walking menace. By the end, there were hundreds of walker bodies lining the streets. At the very end of the episode, we get to see Carl all bandaged up, and getting talked to by Rick.

This episode was fantastic for a lot of reasons: Tons of walker killing action, pretty hardcore character development, and iconic scenes from the comic all came together to make the midseason premier a very rightly anticipated return for the show.

This marks the beginning of the end for the Walkers. Although the human element has always been major in The Walking Dead, last night’s events really embody the turning point for the danger of the walkers. In the next few weeks, we will very likely be moving to another location and meeting some of the most belived characters from the comic.

I can’t wait for more of The Walking Dead. If you’re interested in checking the show out, but don’t want to watch five and a half seasons on Netflix (although you should!), you can catch TWD on AMC, Sunday nights at 9.

The Walking Dead to march on retail shops