Another Sunday night means that there is another new Walking Dead to dissect and go over; This week brings us to a whole new location, bringing us a whole cast of new characters and new problems. 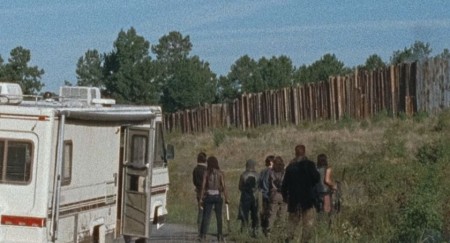 The episode begins with Jesus (Tom Payne) investigating the inside of Carl (Chandler Riggs), Rick (Andrew Lincoln), and Michonne’s (Danai Gurira) house. Carl pulls a gun on Jesus, asking what he is doing in their home. Jesus plays it cool and tells him that he is waiting for Carl’s parents (Richonne!) to get dressed. Rick enters behind Carl buttoning up a shirt, and telling Jesus its time to talk as Daryl (Norman Reedus), Maggie(Lauren Cohen), and more of the old reliable cast comes through the door to take part in the conversation.

The next scene finds the characters all sitting in what looks like a conference room, with Jesus at the head of the table. He explains that he took the truck last week because he didn’t trust Rick and Daryl. Now that they took him back with them though, his mind changed. This group could be trusted.

Jesus explains that he is from a community known as the Hilltop. With other groups, the Hilltop trades to acquire necessary resources. Knowing they are running low on food, Rick and Co. decide to take a ride to the Hilltop with Jesus. Besides a minor rescue mission to save some of Jesus’ people from a car accident, the group arrives largely problem free nearly a day later at the Hilltop.

The Hilltop is sprawling, with a big manor house at its center. Modular housing spatter around it, and various workshops are also present. The group enters the manor, and are told that they can speak with the leader of the Hilltop, Gregory (Xander Berkeley). Maggie meets with Gregory, and shortly into negotiations, he tells her that the Hilltop and Gregory have more leverage, and that the Alexandria group is clearly more in need than the Hilltop. Gregory creepily comes on Maggie, and before any real conclusion is reached, the meeting ends. Jesus tells the group that Gregory will trade, but he needs time to coax Gregory.

Related Article:  The Animate Dead spell is overpowered for Slayer

The next thing that happens is a group that went to drop materials for a group returns, and summons Gregory outside. Before anyone can figure out what is going on,one of the returning people plunges a knife into Gregory’s stomach. Rick and Co. break in to stop the mayhem. After the fight, Jesus takes our hero group inside the manor to tell them about what really just happened.

The viewers are made aware that the Hilltop has an arrangement with a group known as the Saviors and led by a man named Negan. The Hilltop must sacrifice half of their resources to the Saviors, and in return, the Saviors wont slaughter them mercilessly. The group, having already dispatched some of Negan’s men, decide it would be an easy fix, killing Negan and returning the Hilltop’s kidnapped man.

Maggie has a final conversation with Gregory at the end of the episode. For half of the Hilltop’s current resources, the Alexandrians (plus Jesus) will destroy the Saviors. The episode ends with Rick’s group packing up their RV and heading home.

In the next weeks, I really can’t wait to meet this Negan. The Alexandrians think it will be an easy fight. Only time will tell.

Mob of the Dead soundtrack released