Monday morning means that another episode of The Walking Dead ran our feelings through a wood chipper last night. Last night’s episode was pretty intense, so lets cut to it.

The episode begins with some candid shots of different Alexandrians performing normal activities throughout their day. Taking up guard posts, smoking on the porch, and anything else that might constitute a normal day for our resident apocalypse survivalists.

We see what Morgan (Lennie James) was working on at the end of the episode two weeks ago; he was building a prison cell. When Rick (Andrew Lincoln) asks why build a cell, Morgan responds that it might offer the group some choices in the future. 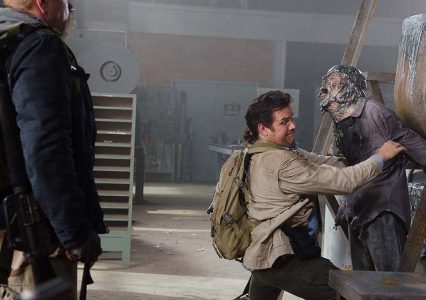 Eugene and Abraham are on what appears to be a scouting mission. They look like they walked to an urban setting and come across an old manufacturing facility. Once entering, Eugene mentions to Abraham that they will be able to manufacture bullets there. This is huge for a community whose biggest export is probably going to be weapons. After being incredulous for a moment, Abraham believes him. Just as he is coming around, a walker moves in from behind a wall. Eugene calls “dibs” on the walker, and moves to kill it, but the walker’s head is coated in hardened metal.

Abe steps in to save Eugene, but Eugene doesn’t want any of it, telling Abraham that his (Abe’s) “services” in keeping Eugene safe are no longer needed. To no surprise, or blame, Abraham gets pissed and tells Eugene to find his own way home, and heads out the door.

Meanwhile, Denise asked Daryl and Rosita to come on a supply run with her. She thought she saw a local apothecary before the world really went to shit and wants to check it out. Although they tell her she isn’t ready to go out, Denise insists.

The run to the actual pharmacy goes about according to plan. The group gets in and finds a ton of prescriptions still on the shelf. While Daryl and Rosita are raiding the medicine shelves, Denise decides that she needs to investigate the sound of a moaning walker. Inside a small room on the side of the shop, she finds an empty crib and a walker with a broken leg. On the wall is scribbled in red, “HUSH HUSH HUSH HUSH HUSH HUSH,” and on the table is a lot of blood and a tiny shoe. Denise quickly leaves the tiny room in a panic.

On the way back, the groups comes to a crossroads they discussed earlier in the episode. Train tracks are quicker, and the road is “twice as far.” Earlier, the group split up, but this time Daryl goes with Rosita and they all take the train tracks.

During the walk, Denise finds a cooler in a car with a walker inside it. She tries to get the attention of Rosita and Daryl, but they blow it off, noting that they got what they came for. Denise takes it upon herself to go inside the car and get the cooler. Nearly getting bit, she kills the walker and finds that the cooler heldm a can of Orange Crush, Tara (Alanna Masterson), Denise’s girlfriends, favorite drink. 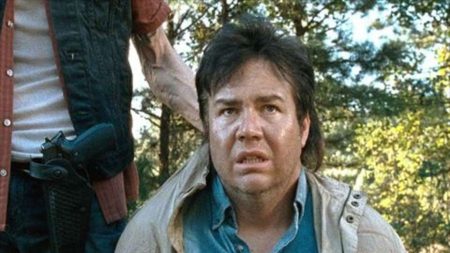 Rosita and Daryl ask how stupid Denise is. Denise takes great offense and tells them that they need to stop living in fear and to get their lives and wants in order. In the middle of her speech though,  a crossbow bolt flies through her head, coming out her eye. There is an eerie moment where she kind of finishes her sentence, then drops. Out of the trees come a group led by Dwight (Austin Amelio), the man who stole Daryl’s crossbow months prior. He has changed since we last saw him; the left half of his face is all burned up. We find out that he was actually aiming for Daryl, but missed due to the kick on the crossbow.

A brief tense situation follows, and we realize that the group has Eugene hostage. Eugene causes the group to look for Abraham behind a stack of barrels, and when they are distracted, he  leans back to bite Daryl in the crotch.  The confusion allows Abraham (who really was behind the barrels), and the rest to get their weapons back and defend themselves. Dwight ends up ordering the group to fall back.

At the very end of the episode, we find out that Carol has left a note for her recent love interest Tobin, mentioning that she is leaving Alexandria because she can’t kill for them anymore.

It looks like I was wrong about this episode being a little bit slower. We had a pretty major death in Denise, and she was becoming a strong, if not especially competent, character. At this point, its obvious that the show is ramping up more and more for the finale and the introduction of Negan (Jeffrey Dean Morgan). I can’t wait for the rest of the season. Only two more weeks.