The march continues for Bucky as he takes on S.H.I.E.L.D. agent Ran Shen and Hydra. 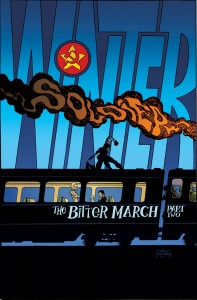 This March, the hunt is on in the pages of WINTER SOLDIER: THE BITTER MARCH #2 – from the blockbuster creative team of Rick Remender & Roland Boschi! S.H.I.E.L.D. Agent Ran Shen is responsible for escorting two of the most important scientists on the planet back to the United States. Too bad, the only thing in his way is the Winter Solider – the Soviet Union’s deadliest operative! And he’ll stop at nothing to make sure the two scientists don’t fall into the wrong hands – even if it means killing them! But first he’ll have to fight his way through an elite Hydra squad led by Chancellor Cassandra and Madam Worm. The high-octane, spy action thriller continues this March in WINTER SOLDIER: THE BITTER MARCH #2!

It was probably a foregone conclusion that there was going to be a Winter Soldier book of some kind this year since the character will be starring in a Captain America movie that’s got his name as a subtitle. I honestly didn’t think it was going be this good though.

The Bitter March has some pretty excellent artwork courtesy of Roland Boschi and tells a tight and action-loaded tale that’s got a cool throwback vibe to it thanks to the Cold War setting. I’d actually like to see some more books take advantage of the time period as there’s probably all kinds of neat stuff a superhero (or villain) could get into in the era of the frosty superpowers. If you like spys and gunplay, give this one a try, even if you don’t like The Winter Soldier all that much, you just might warm up to this Bitter March.

Watch Buck take on all comers when the Winter Soldier: The Bitter March #2 arrives on the racks on March 19th from Boschii and Rick Remender.