Curse of Crows is the final installment of a four-story series. This volume, written by Paul Tobin, Borys Pugacz-Muraszkiewicz, Karolina Stachyra and Travis Currit, illustrated by Piotr Kowalski and colored by Brad Simpson, sees the addition of three writer credits and a change of artists.

Curious about the inner workings of the comic, I sent the main writer, Paul Tobin, some questions.

What was your favorite part about working on the comics?

‘’My favorite part of working on the books is just the fun of playing around in Geralt’s world. I was a fan of it before they asked me to write the comics, having read all the novels and short stories that were available at the time, and played the games that were out then, too. One cool thing is that the gang at CD ProjektRed translated all the other books especially for me and sent them along, so I got a chance to read ALL the original source material’’

In what way did your role change from the previous three titles?

‘’My role changed very little during the course of the three series I’ve done. The process all three times was largely the same: they asked me to come up with some springboards centered around some thoughts they’d already given me, or focal areas they wanted to stress. Then I wrote the full scripts, on my own. With the middle series they went in and changed some dialogue around after I was finished, and on the latest series they went in and changed some dialogue, and also changed some scenes around, doing enough original work that some writer credits were warranted. It’s kind of cool, actually, because it allows me to read my story from a fresh perspective.’’

Joe Querio art differs quite a bit from Piotr Kowalski’s, especially with the more vibrant color usage by Brad Simpson. Do you know if the change of art direction was done intentionally for artistic reasons or for a different reason?

‘’The art changes were made mostly because of scheduling reasons. Sometimes it’s hard to grab the same artist, because they get swept up by other projects. It was fun working with both Joe and Piotr, though. I think they both brought forth different elements of Geralt and his world… Joe with the eerie side, and Piotr with his environments and characters. Both great guys!’’

(If you’re reading this, thanks again for your time Mr. Tobin.) 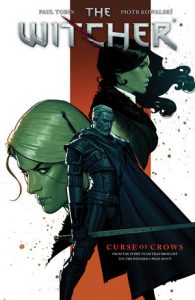 The comic starts with Geralt and Ciri saving a damsel in distress. It would be difficult to add more without revealing too much, so I’ll just say that the story revolves around “the past comes back to haunt them”. The story sometimes jumps from present to past, which might be a bit confusing for people that are unfamiliar with the source material.

Related Article:  Playmobil Back to the Future (Toy) Review

The main timeline being weaved with instances of the past is done in a way where they intertwine wonderfully. It shows how Geralt has handled a similar case in the past and how that influences his choice in the present. The entire plot could be a DLC on its own or a short story in book form.

The creators masterfully captured Geralt’s personality: a gruffy Witcher with a tendency to let his feelings get the best of him, but who never conveys it through words. I’ve also laughed quite a few times at Geralt’s astute observations. As always, letting others know that the world of The Witcher is a complicated world where sometimes the real monsters are the humans.

Like in the videogame, Geralt is not a typical Witcher. He believes that his sword is his last measure, which is shown by the different encounters he has with monsters (some of which are human) throughout his journey. You get to know this Geralt from the start, when he has to deal with a troll he has met before.

This is really where the writing shines: besides laughing from the great humor, I got a feeling of familiarity that made me feel right at home.

In a semi-realistic style, the art of Curse of Crows entices the reader’s eye from one panel to the next. Much of the backgrounds are very finely detailed, which may occasionally compete for attention with the somewhat text-heavy nature of the book. The colors, usually muted and rather pastel, are sparingly inter-cut by bold, graphic shades of yellow and red, to a great dynamic effect. Cold and warm hues are used contrastingly in some scenes, strongly setting the tone and atmosphere.

I had a blast reading Curse of Crows. I’ve read all the books and played all the games, so it was great to spend just a little more time in Geralt’s world.

It’s a no-brainer for anyone that has enjoyed The Witcher in any medium. Read it when you have the chance!

Days Gone tech review — Loaded with zombies, but it’s a live one