Soon you’ll be able to play This War of Mine, the game about being on the civilian side of a conflict, on your tablet. 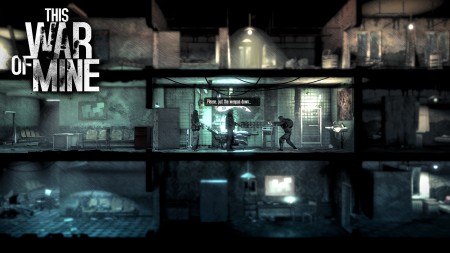 You might know This War of Mine from our coverage of the PC game from a while back. If not, then all you really have to know is that the game is all about survival in a war-torn country. Here’s the thing though, you’re not a strapped and armed to the teeth soldier or merc. Nope, you’re an average joe or jane.

And by that, I don’t mean that you somehow pick up an assault rifle and manage to turn the tide single-handedly. Your job in this game is simply to survive the conflict, and ensure the lives of the men and women in your group- all of whom are in the same boat as you.

It’s a fresh take on the ‘war’ theme that pervades a ton of games today (and most of the media at large) and This War of Mine manages to tackle these elements in a thoughtful way- and also look pretty darn good doing it.

The game’s been available on the PC and consoles for a while now, but is finally making its way to a more portable platform, the tablet. You’ll be able to pick up This War of Mine on as-yet-undetailed tablets (though you could probably guess) some time soon. In the meantime though, click here to play through an interactive trailer for the game. It’ll give you a hint as to how it plays, and just what kind of an ‘adventure’ you can expect from the finished product.

A Total War Saga: Troy’s Amazons DLC will be free to keep until October