The Thunder God goes toe-to-toe with the dark elf Malekith at the conclusion to the epic The Accursed storyline. 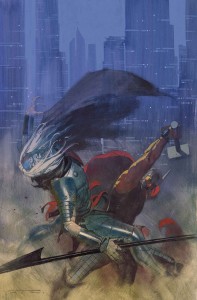 This January, Malekith meets his match in THOR: GOD OF THUNDER #17 – the grand finale of ‘The Accursed’! From critically acclaimed creators Jason Aaron and Ron Garney – Thor and the League of Realms desperate chase across the Nine Realms has finally come to an end. Malekith and his Dark Elves prepare to make their final stand against the forces of good. Prepare for the knock-down, drag-out fight you’ve been waiting for as Thor and Malekith battle to the finish as Earth hangs in the balance! Thor and his companions stand ready to defend Midgard – except for the traitor among them! But even as the final battle begins – has Malekith already won? All will be revealed in the climactic THOR: GOD OF THUNDER #17 this January!

Thor: God of Thunder has easily been one of the biggest highlights of the Marvel NOW! revamp that started a while back. The book is pretty much pure action/adventure gold month in and month out and has a gloriously Tolkein-esque vibe to it. It revels in the main character’s link to real world mythology and I think it might be the first monthly featuring Thor that actually plays up that angle so heavily. To put it simply, it’s just plain awesome.

If you haven’t been reading, you might want to catch up before issue 17 hits because the tussle with Malekith (timed nicely with the release of the Thor: The Dark World film) has been a really good one that harkens back to the epic battles that Thor had years ago in the Marvel U. It’s good stuff that you really need to be reading if you’re in any way a fan of action, mythology, or bigger than life heroes.

Grab a copy of Thor: God of Thunder #17 when it hits the stands on January 15th from the team of writer Jason Aaron and artists Ron Garney and Emmanuela Luppachino.