Considered by many to be the pinnacle of real-time strategy games, the Total War series has seen massive success in the past few years. With almost a decade passed since the previous installment (Rome: Total War), there is quite a bit of hype regarding such a monumental sequel. Published by the ever so popular Sega, and created by long running developer Creative Assembly, we can only expect the best from this game.

And having been able to play it, I dare say that all the hype has been well placed.

Judging by the name, you can most certainly expect the game to be based on ancient Roman civilization, with all the blood and lore that comes with the territory. You history buffs will be happy to know that Rome II is factual as well as fun, with faithful recreations of long gone cities and towns. You also play against some of the most ferocious groups known to mankind, such as the Persians, the Egyptians and Carthage. Each with their own weapons and army types; such as Carthage which employs the use of elephants in war, which provide both advantages and disadvantages in battle. Each faction comes with its own logo and colors, making it easy to tell friend from foe.

Related Article:  You want Chaos? Battlefleet Gothic: Armada has got your Chaos 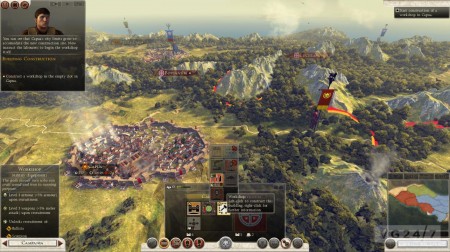 The battles are still as massive as ever and you can expect your computer to strain some, having thousands of units interacting with each other. The maps are massive and open playgrounds for every type of tactic possible. Dense forests and open fields provide different approaches to each map and optional objectives provide incentive to go to different parts of the map and fully wipe out the enemy.

It does tend to get somewhat chaotic when too much goes on at once, but once you get used to the scale of the battles, you begin to understand tactics. Also, when playing single player, you can change the speed in which time passes and pause the action onscreen. Tactical Mode also adds a new level of control as you can fight battles from above and move different groups at once.

The actual fighting itself is somewhat more intuitive then before too, allowing you to engage enemies in various formations and positions. For example: you might have your soldiers put their shields up to protect against arrows or move a catapult to attack a particularly undefended wall. The different units appear as a card deck at the bottom of the screen and allow you to jump from one group to another quickly. The only issue with this is when you control 10’s of units and you don’t know which card is linked to which unit on the map making for some unnecessary camera movement. 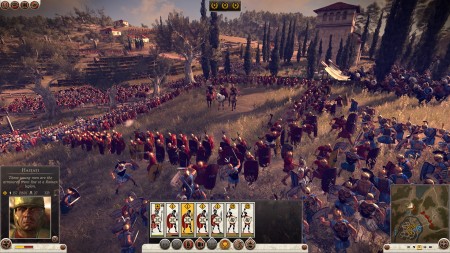 While almost all the units have some form of ranged attack, it’s important to monitor their ammo so you’re not left with some unprotected archers. The camera also provides some dynamic views which mean you can view each fight from the shoulders of your units.

It makes for some nice watching but is completely useless in battle, when you have to focus on large numbers of troops. Units also seem to take a while to move from one place to another, especially on larger maps where you have to wait a few minutes for them to reach their targets. You can choose a charge move, but it wastes valuable morale which makes you weaker in battle.

Rome II is also spectacularly beautiful, everything about the presentation screams quality. Be it the changing weather, the setting sun and rising moon or the detail on each soldier’s armor. The winter maps also have an impact on your game as units take longer to walk in the snow and your men tend to loose health when standing still too long. Boats play a larger role in this edition too as they can be used to attack seaside bases and other enemy equipment.

For once, the preorder hype actual lived to the expectations of a devout community. Certainly one of the most fleshed out and comprehensive strategy games out there, Total War: Rome 2, outshines all competition.

With a great single player campaign and an elaborate multiplayer offering, it will keep your attention for weeks to come and begin to drain your very soul. Not that this is bad, but can’t be argued that some of you need to get out more. *Ahem* Insults aside, Total War: Rome 2 is surely set to be one of the contenders for game of the year and truly shows that the Romans can make games as good as they make empires.

As Far As The Eye (PC) Review: Unexpectedly Pleasant