You know ’em, you love ’em, and there was a massive tidal wave of Pops! at Toy Fair this year. 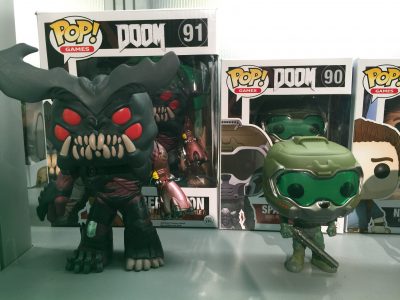 Funky has really exploded in the last few years. They always made some neat stuff really, but the advent of Pop! and now the ReAction line of retro-styled action figures has lit up retail pretty much everywhere from GameStop to Hot Topic, and that’s not even mentioning online stores that stock after-market Pops!, some of which can go for huge amounts of cash.

While those are past releases, Funko had plenty of the new stuff on hand at Toy Fair 2016 as well, including Voltron, ID4, and Pac Man. Fans of existing Funko properties should be happy too, with lots of new Marvel, DC, and more on hand. In fact, there was a monster wall of the vinyl figures in the Funko booth, which is something that fans have probably become used to seeing in their own homes… these things are kind of addictive you know.

Related Article:  Coming up: The games of May 2020

There wasn’t all that much in the booth on ReAction, which makes me think that there’s lots more to come on those popular action figures to come. A smattering of other items rounded out the showing though, including Five Nights at Freddie’s figures. And I’m happy (?) to report that these figures are just as creepy as the game series that they’re based on. Well, almost.

Oh, and the Playmobil x Funko figures are worth your time. They’re pretty awesome, particularly if you grew up playing with Playmobil, but really even if you didn’t. I mean, Doc and Marty Playmobil figures? I can’t not buy those.