There were loads and loads of Turtles in the Playmates booth at Toy Fair ’16. That’s nothing unusual. What was kind of odd though, was the absence of any Turtles movie stuff.

I bring up the movie sequel toys simply because there really shouldn’t be much of a surprise anymore about what’s coming. A few weeks back, we saw a leak on the ‘net that showed off not just the four Turtles as they’ll appear in this Summer’s Teenage Mutant Ninja Turtles 2: Out of the Shadows feature film, but also Shredder, a Foot Soldier, and Krang. Heck we even saw the Technodrome!

And if that’s not enough for you, all of the above was shown in detail on the Super Bowl spot for the movie. So my point is, that there’s no reason why the Turtles movie toys had to be kept under wraps in the least. I assume that’s what was happening anyway, as they weren’t out in the booth and my ‘tour guide’ (who was otherwise awesome) didn’t mention them in the slightest. 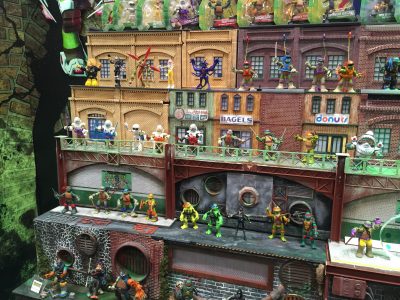 So if you were expecting to see any of that here in this article, well… sorry?

What we do have though are some shots of the nickelodeon figures and vehicles and some of the periphery stuff like the new blasters (which both really cool and tricky as hell to shoot with accuracy) and the ever-popular Mutations line.

The core line of TMNT is the nick line, so these are the characters that you more than likely know and love from the cartoon. There wasn’t a deluge of them to be honest, which was a little surprising. Nonetheless, there were some notables. 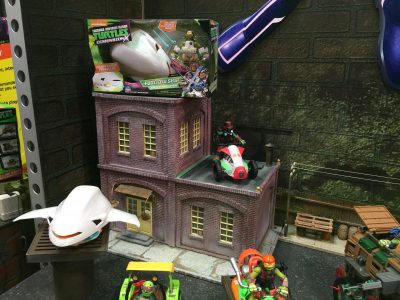 Shredder’s daughter Karai finally appears in human (non-serpent) for, which is a figure that many fans have been waiting for. There were also some figures from the Dimension X storyline that either have already arrived, or will soon be hitting store shelves, and some stuff that we can’t quite mention yet – but it’s cool, trust me.

The core line also stars the Pet to Ninja figures, the squishable Squeeze ’ems, and Talk to me Mikey. And that last one had people talking, like really talking, on the show floor. I actually ran into a few reporters who were lit up about the figure.

More or less, Talk to me Mikey is an interactive Michelangelo who will answer questions and is somewhat aware of his surroundings. There’s no artificial intelligence here (I don’t think), but he’ll know if he’s laying down or sitting and can hold a decent conversation if you ask him something of the list of stuff that he’ll converse over. He can also hear his name from a really good distance – something that I can attest to personally.

While I’m not a collector of Half Shell Heroes, I do have to admit that they’re pretty awesome.

HSH are stylized miniature TMNT figures, made with an eye towards youngsters. Be that as it may though, I’d be hard pressed to say that these guys wouldn’t also look pretty great on my desk, or just about anywhere really. Bottom line, they’re cool. 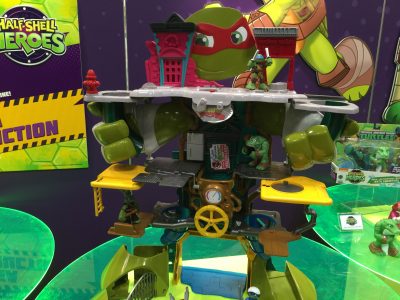 Exactly what they sound like, Mutations comprises a series of figures that can transform into vehicles. These vehicles don’t hold additional figures, but they do have a sculpted little Tuttle in the cockpit already. There’s a heavy ‘Transformers’ vibe happening with them, and they actually look pretty nifty.

On the other side of things, the T-Machines are also Turtle-formers, but transform with just one touch. This isn’t new for the Turtles line, but it is as far as figures that turn into vehicles. Last year, Playmates had a line (and still does) that switched between two different vehicles, but turning into figures is definitely a new trick for them. 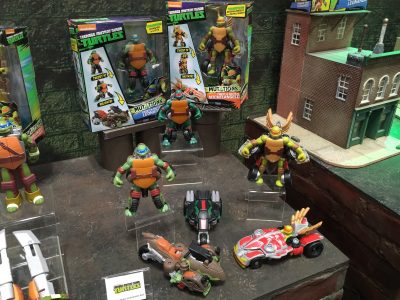 Completely different than the two lines mentioned above, T-Sprints are little figures that have wheels built right in and feature a ‘pullback and go’ action. You can then rest these lil’ dudes into shells of iconic TMNT means of conveyance. The result is actually pretty cool, and yet another item that would definitely appeal to kids and the bigger dans out of the adult set.

Related Article:  Layers of Fears expands the plotlines of the original games, made with Unreal Engine 5

And speaking of ‘completely different’, T-Blasts are Turtles guns. Yes, you read that correctly.

There aren’t a whole lot of times that the fab four has used firearms across any of the formats that they appear in, but put that aside fo

r a few because these are actually re4ally neat. Not just a pull back and fire sort of item, these soft-dart-firing cannons actually take quite a bit of skill to shoot with accuracy.

More of a slingshot than a gun really, the T-Blasts require users to pull back the sculpted bandana (the guns actually look like the Turtles faces) and then release to launch its darts. As I said, it ain’t easy to fire these with any sort of accuracy, but I’d imagine it feels pretty good when you do (I missed everything). 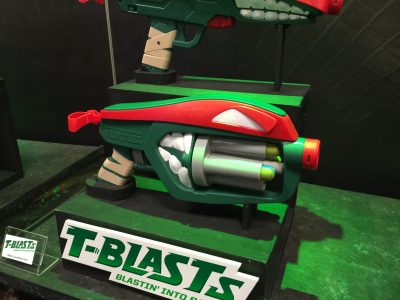 So there you have it, plenty to like and anticipate if you’re a big time Turtles fan – and even more if you’re looking forward to the movie’s series of action figures.

Toys R Us rises from the dead as Geoffrey’s Toy Box, stores to reopen this year