If you’ve been enjoying the 30th anniversary goodness for the Transformers brand at publisher IDW, we’ve got some good news as there’s more to come. 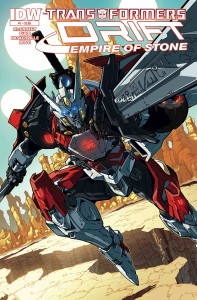 So far here in 2014, we’ve seen the conclusion of the Transformers: ReGeneration One series, the events of Dark Cybertron, the debut of Windblade, and the launch of the wildly successful (and very so slightly off the wall) G.I Joe vs Transformers. It’s been a big year for the Transformers property thus far, and it’s only set to get bigger on into 2015.

“It’s been an amazing year for TRANSFORMERS comics,” said Barber, IDW Publishing’s Senior Editor. “The fans seem to be digging what we’re making, and it seems like there’s more fans every day. It’s been amazing seeing how fast people have come to love WINDBLADE—and especially gratifying to see kids inspired by her. Add to that the phenomenal response to TRANSFORMERS vs. G.I. JOE and the outstanding level of quality on the other ongoing series, and it’s been a banner year. Wait’ll everybody sees what we’ve got coming in 2015!”

So what’s left to loo forward to? Well, outside of the two excellent ongoing series’ that IDW is still putting out on a monthly basis (Robots in Disguise and More Than Meets the Eye) and the recently launched Primacy (which caps off the Autocracy/Monstrosity ‘trilogy’), there’s also the mini-series centered on Drift. The Autobot star of the Age of Extinction feature film (that hit this past Summer) actually got his start in IDW’s comics and now is set to feature in a mini-series all his own called Empire of Stone.

From creators Shane McCarthy and Guido Guidi, Drift: Empire of Stone sends the Autobot into the far reaches of deep space on a mission to ‘clean’ things up. And then, of course, there’s Angry Birds Transformers. Probably the weirdest TF crossover of all time (even stranger than that time they met Spider-Man) Angry Birds Transformers debuts this week and mashes up two  popular, and yet very different, franchises.

Wow, is it me, or is that a lot of Transformers books? I guess when they’re this good, you can make as many as you like.

Revisit the past with Braid: Anniversary Edition in 2021