There will be no Assassin’s Creed release next year, Ubisoft said as much. But with DLC this expansive, you might not miss a yearly installment.

The First Blade and Atlantis

It’s true (at least, right now it is) that there will be no Assassin’s Creed game in 2019. With the overall size and scope of the just released Assassin’s Creed Odyssey though, fans might be sated all the same. Add to that this latest paid DLC announcement, and you’re going to have a ton of Creed to play next year.

A total of two packs have been announced. They’ll both be delivered in installments of six, kicking off this December and then spread out across the next year.

There technically is a third AC download coming, though it’s not for Odyssey. It’s the entire Assassin’s Creed III game, plus all of its DLC, remastered for modern consoles.

That, is a ton of content. It’s all wrapped up in the season pass too, so if you have that then you’re good to go for all of the above. As much as it is though, there’s even more coming up along side it.

And this stuff is free. 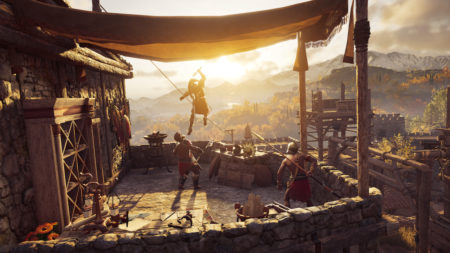 Ubisoft has free content planned for Odyssey, all though 2019. So even if you’re down to buy in for the Season Pass, you can still get some more life out of the game. Available for everyone to download will be:

Ubisoft details the war against cheats in Rainbow Six Siege

Assassin’s Creed Valhalla will be bigger than Odyssey