The first issue of Street Fighter Unlimited will be graced with a series of alt covers when it arrives in December. 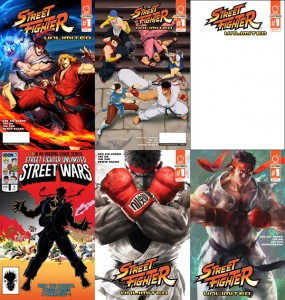 Now those are nice- especially that ‘Street Wars’ variant with Evil Ryu on the cover. Street Fighter Unlimited, by the way, is a brand new ongoing comic series from Udon. You probably know the publisher best from their amazing art books, most of which focus on Capcom’s classic franchises.

The new book will launch a promised ‘new era’ for the World Warriors of Street Fighter, and will feature the creative team of Ken Siu-chong and artist Joe Ng, who previously worked on Street Fighter Origins: Akuma.  Aside from the main story in the comic, you’ll also get a backup tale from Jim Zub and Edwin Huang, so it sounds like you get a fair bit of bang for your buck here. And as you can see, there are some wicked variant covers set for release right alongside the standard edition of the first issue.

Seven covers total will be heading to comic stores, including the Street Wars cover, the Street Fighter V variant, and that blank edition, which is just perfect for getting signatures or sketches at comic cons. Here’s the Diamond order codes list of what’s on the way, and what you’ll need to request be pulled from your local shop (if they’re getting them):