Young X-Man Tempus was trapped in the far future via her own time-travel bubble for years, so what exactly did she see and do in that far future time? 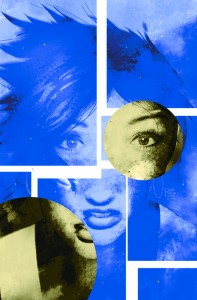 This December, spinning directly out of the pages of the New York Times Bestselling Uncanny X-Men, superstar writer Brian Michael Bendis teams with critically-acclaimed artist Andrea Sorrentino to finally answer one of the burning questions on fan’s minds – what happened to Eva Bell?! Revealed this past weekend at San Diego Comic-Con, the answers you’ve been waiting for are in the oversizedUNCANNY X-MEN ANNUAL #1 – and the accidental adventures of the young, time-travelling X-Man will shock you!

“It is the utmost grandest X-Men tradition to have your mutant power be the coolest thing about you and the scariest thing,” says writer Brian Michael Bendis in an interview with Marvel.com. “It was only a matter of time before [Eva] was thrust into a situation that revealed the scary side of time related powers.”

Unable to fully control her powers, Eva Bell, Codename: Tempus had disappeared in the blink of an eye during an X-Men training mission. Though she re-appeared moments later, she had aged many years. Trapped in her own time bubble, Tempus embarked on a journey into the far future of the Marvel Universe. A journey that would change the young X-Man forever! This oversized annual also marks the first ever Marvel project for critically acclaimed artist Andrea Sorrentino (Green Arrow).

“Andrea is someone we’ve been dying to work with for some time,” says Executive Editor Mike Marts. “It seemed like the perfect tale to capitalize on Andrea’s strengths as an artist, especially his talent of establishing expansive and panoramic settings – which this issue has PLENTY of!”

How long was Eva trapped inside her temporal sphere? What horrors did she witness in an uncertain and dangerous future? And more importantly – why would she keep it a secret from her teammates? All will be revealed when Eva Bell takes center stage in Bendis & Sorrentino’s UNCANNY X-MEN ANNUAL #1 – and she’ll never be the same again!

I know almost nothing about Tempus or the current run of Uncanny, but this actually sounds like a pretty neat story and one that, as Bendis says, sounds classically X-Men in tone. Annuals are always a solid time to jump onto a book too since they mostly have self-contained stories that can be absorbed without having prior knowledge of what’s happening in the ongoing series’.

So for lapsed X-Men fans, or just those who haven’t been paying attention as of late, Uncanny X-Men Annual #1 is your chance to see what you’ve been missing. The book lands on the racks from Bendis and Sorrentino this coming December.

The X-Men have a revolution in their future