Destination America’s Alien Files are opened once again, this time to deduce the true origin of alien visitors. 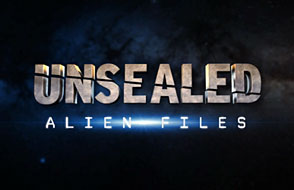 Whether you’re in the ‘believer’ or ‘non-believer’ camp (I refuse to use the word ‘skeptic’, since that’s really not applicable to the latter) this stuff is pretty darn cool. In fact, I don’t think I’m going out on too much a limb to say that out of all the documentary-style shows on television that explore the alien mythos of the modern age (and it does go way further back than 1947), Alien Files is one of the best.

The program takes a way more mature approach to the subject than you might be used to seeing and is pretty easily in the top three of alien-themed shows on the tube. You won’t find any (well, hardly any) embarrassing reenactments here, nor will you find all that much in the way of definitive answers to the questions that they pose, which is a good thing with a subject like this one. Instead, Alien Files seems to consistently present a multitude of different possible scenarios and really doesn’t lean towards one or the other.

Now, don’t get me wrong, this is a show for those who have at least some interest in the subject and believe (at least a little) that there’s something happening in the world in general that we’re not really being let in on as to the ‘alien’ possibility. But it’s the way that it’s presented, as I mentioned above, that makes it one of my favorites personally.

Take episode one of the new third season of the show that’s set to debut tonight on Destination America. The installment researches and presents alien origin theories with guests like Nick Pope (formerly of the Ministry of Defense in the UK) and ‘Black Vault’ creator John Greenewald, Jr. Without getting too deep into the thoughts presented (I don’t want to spoil the whole show), you’ll hear things about the famous Betty and Barney Hill abduction case that are still astounding more than half a century later, stuff about possible points of origin for alien life within our own star system, some truly bizarre things about the Sun itself, and even a pretty wild time-travel theory. That’s a broad scope by anyone’s measure.

And all of it is presented in a well put-together package that’s smart and easy to understand even for someone who’s a xeno neophyte. Even if you’re not the most die-hard amateur researcher or alien-believer, this stuff is just fun to watch. It’s great for not only engaging the imagination, but also for letting your mind go and thinking a little bit (or a lot of bit) out side the box that we’re so used to being confined in.

Though the initial episode of season three isn’t the most in-depth of things, something that it really doesn’t have the time slot to be, it does a heck of a lot to cover a ton of ground on the potential origins of extraterrestrial life. Think of it like a crash course- you won’t get a full curriculum worth of info, but you’ll sure get more than enough of the basics.

Season three kicks off tonight at 9/8c on Destination America.