I don’t think there was anyone who didn’t like the round one of the initiative, and now Valiant Comics is bringing on Level Two. 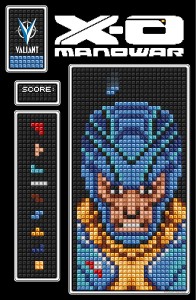 “Our first batch of Valiant 8-bit releases have been an immediate success with fans, retailers, and critics, and all three have been asking us to expand the scope of the Valiant 8-bit program since it was first announced,” said Valiant Executive Editor Warren Simons. “Level Two is that expansion, and Matthew, Donovan and Valiant’s own Assistant Editor Josh Johns have done a phenomenal job. Not only has Level Two moved beyond cartridge gaming for inspiration, but it will also include more than just incredible covers. Fans of the Valiant 8-bit initiative, take note – we have some exciting developments in store that you’ll be hearing about very soon.”

That first batch that Simons is talking about is in stores now and pretty much all gone already as they’ve proved (not too surprisingly) to be quite the popular little item.

Level Two, as the publisher is calling it, will expand the offerings to books that haven’t featured the retro-gaming inspired works as of yet but will also return to comics that have. Take X-O for example; the comic featured a Metroid look for the first 8-Bit issue and now sports a Tetris-like cover in the forthcoming issue #18.

In all, Level Two will hit all seven of Valiant’s monthly titles including:

The series kicks off in October of this year (just in time for NYCC) and is probably going to be just as hot as the currently dropping issues. If you want in, it’s probably not a bad idea to head on down to your local comic shop and register your interest, if not full on preorder the whole line.

Entertainment website Topless Robot has some additional covers posted up including an awesome Archer & Armstrong ‘Street Fighter’ cover and a really cool looking Bloodshot one styled like Doom. The link is more than worth your time, so check that out here.

Die-Cut covers are back with Marvel’s Spider-Woman #1