It’s an announcement that should make longtime Valiant fans very happy indeed – the publisher is going back to the future for 2016 with 4001 A.D. 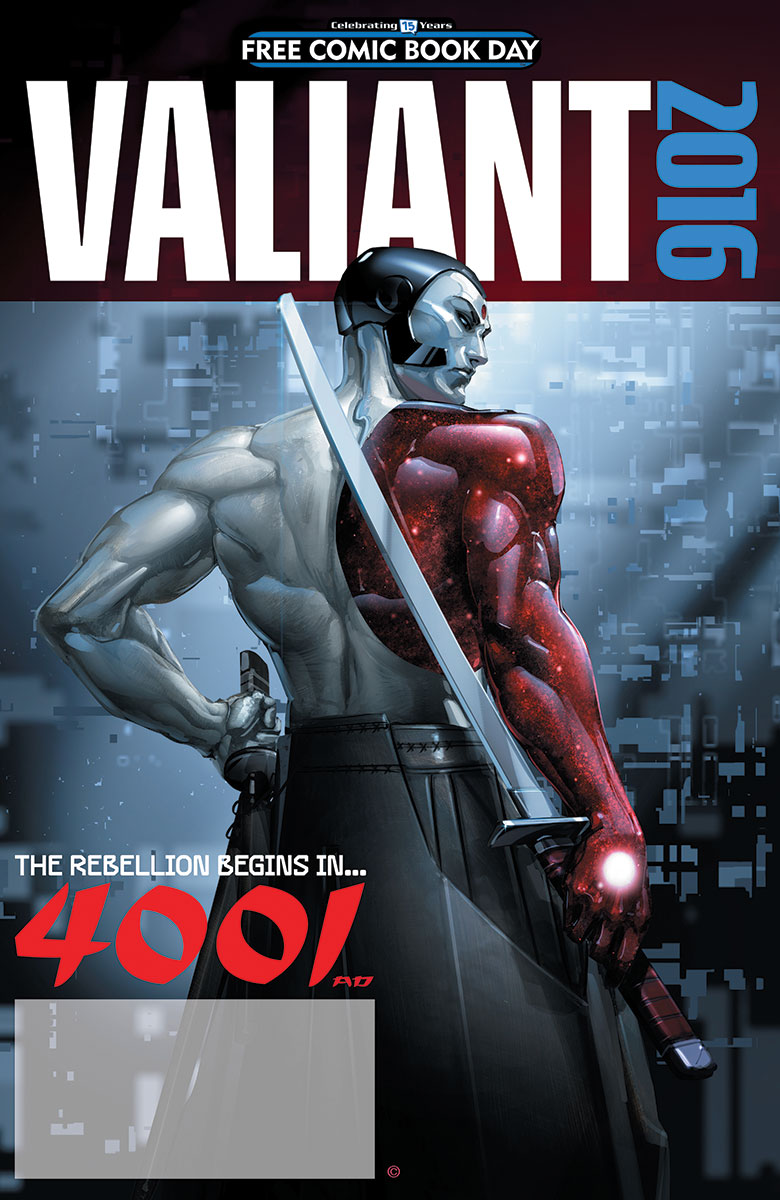 “The year 4001 has always been a vital component of the Valiant Universe but, now, for the first time, we’ll finally be pulling back to reveal the true scale of this world and the wildly diverse cast of heroes that inhabit it,” said Valiant Editor-in-Chief Warren Simons. “Matt Kindt and Clayton Crain have pushed themselves to design a story that is positively brimming with crazy-mad energy, continent-sized ideas and unthinkable potential. From cosmic beings and sentient cities to post-apocalyptic warrior kings and cybernetic samurai, 4001 A.D. will see the Valiant heroes pushed beyond the threshold and into territory far beyond anything we have ever attempted before.”

“Over the past two years, Matt and Clayton have defied all expectations with their epic and acclaimed work on RAI. Now, they’re expanding that vision to include not just one hero, but dozens for a James Cameron-meets-Jack Kirby vision of Valiant’s future and RAI’s incredibly important place at its epicenter,” said Valiant CEO & Chief Creative Officer Dinesh Shamdasani. “As always, everyone at Valiant – from our writers to our artists to our editorial team – is challenging themselves to ensure that 4001 A.D. lives up to Valiant’s growing reputation for creating the highest-quality and most accessible event comics anywhere in the industry today.”

I think that’s extremely fair to say by the way. Valiant has had some excellently realized event books, most recently with Book of Death. The various mini-series’ are shockingly self-contained, and yet engrossing for even non-fans of the publisher. Though, there should eerily be no non-fans of Valiant at this point.

They’ve very simply made some of the coolest and freshest (in terms of ideas) superhero comics out there in the last few years, and it sounds like 4001 A.D. might live up to that reputation. Valiant fans should be well-acquainted with Rai by now, but as CEO/CCO Dinesh Shamdasani himself hints at above, there’s plenty more to the far future of Valiant’s universe than just the cyber-samurai.

Though even with that, it certainly sounds like this new book will not only include the former protector of New Japan, but will focus on him and his battle against the AI controller of his country – Father.

One hundred years from today, Father – the benevolent artificial intelligence that governs the island nation of Japan – will gain sentience. To defend its borders, Father will take drastic action by launching Japan into space…where its people can thrive in isolation, away from the overpopulated and resource-deprived planet below. Over the centuries, as New Japan orbits our increasingly unstable world, it will become a model society – one built on peace, prosperity…and Father’s control.

A thousand years from today, Father will create the first Rai, founding a lineage of technologically enhanced heroes engineered to defend New Japan and sworn to protect it from all enemies. For hundreds of years into the future, the Rai will single-handedly enforce New Japan’s justice well…and serve Father without question.

Now, at the dawn of 4001 A.D., the latest Rai is about to inherit the dark truth behind the origin of his kind…and discover the sinister secret at the heart of Father’s existence. For New Japan to live, Earth must die…and as Rai challenges his former master for the first time in more than a millennium, the lone guardian of New Japan will be cast out of his own Father’s kingdom…

Exiled from the only realm he’s ever known, Rai now walks the ravaged world of 4001 A.D. in search of forgotten heroes like himself…on a mission to collect the last surviving legends of a broken planet…and to forge a rebellion with the power to bring the most advanced civilization in history crashing back down to Earth.

The most surprising part of that description for me? X-O Manowar. Everybody else on that list of heroes that figure into 4001 A.D. is effectively immortal, but Aric (the man in the X-O armor) is mortal. I’m going to guess that that means there’s someone else wearing the universe’s most powerful weapon, which is going to be interesting in and of itself.

Archer & Armstrong to crossover with Bloodshot in Mission: Improbable