Following up on last year’s super-cool 8bit themed covers for Valiant’s line of superhero comics, the publisher is ready to get crafty for 2014’s version. A little something they like to call Valiantcraft. 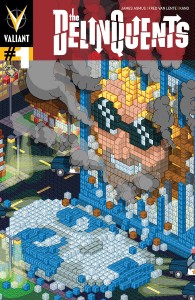 “Last year’s Valiant 8-Bit covers initiative was an incredible success, and #ValiantCraft is the next evolution of an idea that really resounded with fans and retailers,” said Valiant Publisher Fred Pierce. “Donovan Santiago has done a phenomenal job realizing Valiant’s most popular characters like they’ve never been seen before – and, just as we did last year in the wake of Valiant 8-Bit’s sold-out debut, we won’t be limiting the scope of #ValiantCraft to comics alone. Look for even more announcements as the summer continues.”

“I was super, super-lucky to once again team up with Donovan Santiago on such an incredibly fun project,” said Valiant Assistant Editor Josh Johns. “Donovan has brought an incredible amount of creativity and quality to each concept, far exceeding our expectations. Just like our line of Valiant 8-Bit covers, this is a project that can appeal to everyday comic readers and new audiences alike. Hopefully, fans will have just as much fun with these books, and the stories inside them, as we did working on them.”

If you’re a Minecraft devotee, the image above should be instantly recognizable as something that you could conceivably make in the building/crafting/Creeper-slaying video game. Valiant’s variation on the theme features their characters carved into Minecraft-like blocks and is set to kickoff with the first issue of The Delinquents miniseries (which is a “disastrous” teaming of Quantum and Woody and Archer & Armstrong) and run through the entire line in August.

Here’s your official checklist so you can keep track later this Summer:

Have a look at the gallery and honestly tell me that don’t want all of these right now.