Publisher Valiant Comics will be unveiling a brand new line of vinyl toys based on its popular superhero universe at the big NYC con. 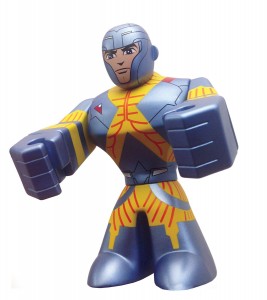 “Since day one, Valiant’s fans around the world have been demanding figures and figurines of these iconic heroes,” said Russell A. Brown, President of Consumer Products, Promotions, and Ad Sales for Valiant Entertainment. “In CKRTLAB TOYS, we’ve found the perfect partner to make that dream a reality, and we can’t wait to get the first-ever X-O Manowar figure in front of fans at New York Comic-Con 2014.”

It’s only fitting that the series kicks off with X-O. Aric has, after all, been the marquee hero for Valiant’s relaunch that began in 2012 with X-O Manowar #1. Originally debuting in 1992’s Valiant Universe, the X-O character has proven to be a popular one with fans too, selling something in the way of 8 million copies of his monthly book- a book that’s looking just as big today.

The new figure, which is the first in a series, will feature the Visigoth warrior in his alien armor. Standing in at 5.5 inches with 6 points of articulation and his ‘lightning sword’ as an accessory, the Aric figures will cost $25 each and be strictly limited to only 150 pieces. You can find them (while they last) at Valiant’s booth, which is number 2028 on the show floor.

New York Comic Con is set to run from October 9th through the 12th and the figure will be available (again, as long as the stock lasts) throughout.

Valiant at the New York Comic-Con