This year will see more than one Bloodshot epic as Valiant has officially announced Bloodshot Island. 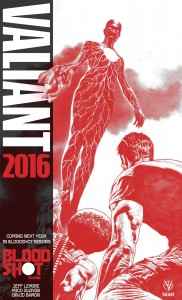 We already know about The Analog Man, which is a kind of sci-fi/post apocalyptic story that’ll play out in Bloodshot Reborn, the publisher’s currently running Bloodshot solo title. Now though, they’ve announced another Bloodshot book that’s on the way with Bloodshot Island. Maybe.

It’s actually a teaser image that has been sent around to press, and there’s nothing in the way of exposition on what it actually means. Here’s what we do know though: that’s Bloodshot on the right (you can tell by the hair), and an unknown man the left who looks like he might be working with Ray (Bloodshot).

As to who that is floating in the middle, engulfed by nanotech Project Rising Spirit ‘bots, well I actually have no idea. But we’re sure to find out at some point as Bloodshot Island is set to arrive this year in some form. We’ll have more when it’s announced.

Valiant brings Shadowman and Ninjak together for Operation: Deadside