As Summer’s crossover event Book of Death, continues for Valiant Comics and its heroes, Ninjak takes the spotlight in a story that tells of his last days in a future ravaged by a third Armor Hunters assault. 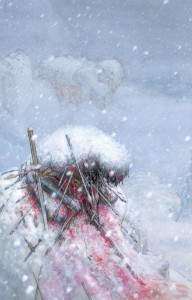 In the ruins of his mansion, Colin King hunkers down as the last living member of Unity after the Third Armor Hunt – or so he thinks. A visit from an old friend and a peace offering present the chance for Ninjak to break the cycle of death and escape the horrible fate foretold in the Book of the Geomancer. Will he betray his dead friends or will THE FALL OF NINJAK come to pass and give rise to a very familiar future…?

‘Friend’ might be stretching it a bit, as Livewire looks like anything but in the preview pages below. And oh man is there a lot to digest here. Without reading the whole book, which isn’t due till August, The Fall of Ninjak looks to be placed sometime in a distant future.

Surrounded by the remnants of what’s left after a third Armor Hunter war, Colin King lives a quiet life in the wreckage of his home. This of course, has to give you a little pause if you’ve been following Valiant’s books as of late. We already know that there’s a new Dark Age in the far future after all, and we saw a glimpse of a wasteland-like Earth in Rai (which takes place in the year 4001). It should be interesting to see what more is revealed as Book of Death runs its course, since presumably all of the ‘Fall of’ issues will be set in a relatively far off time period.

As usual with Valiant’s stuff, the book has one heck of a creative team, so it should be a terrific read. Don’t miss it when Matt Kindt and Trevor Hairsine take the helm for The Fall of Ninjak #1, which hits on August 26th.

Art of Capcom 3 heading to stores this fall