Dynamite Comics has announced their new James Bond 007 series  will kick off this coming November, and feature the tenets of Warren Ellis and artist Jason Masters. 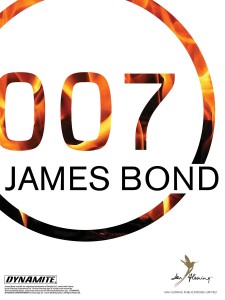 “Ian Fleming’s James Bond is an icon, and it’s a delight to tell visual narratives with the original, brutal, damaged Bond of the books,” says Warren Ellis.

The first six-issue story arc in the James Bond 007 comic book series will be entitled “VARGR.” James Bond returns to London after a mission of vengeance in Helsinki, to take up the workload of a fallen 00 Section agent… but something evil is moving through the back streets of the city, and sinister plans are being laid for Bond in Berlin.

Great-nephew of Ian Fleming, Diggory Laycock says, “We were thrilled when Warren agreed to write the first story in this exciting new chapter of literary James Bond. Warren’s style is gritty, dark, and unique, and we can’t wait to see James Bond embroiled in an adventure of his creation.”

“Warren Ellis is one of the most brilliant writers of the 21st century, not just in comics but across all media,” says Nick Barrucci, CEO and Publisher of Dynamite Entertainment. “When we approached him for the launch, we hoped he could make time in his very busy schedule, and we are fortunate and thankful that he was able to. We met with Warren and everyone at IFPL, and Warren’s passion for the novels showed. He really is the perfect writer for Bond, and I can’t express how excited we are that he is tackling the ongoing series. This will be James Bond unlike anything you’ve ever seen before, true to Ian Fleming’s source material yet bursting all preconceptions of what a Bond story should be.”

Senior Editor Joseph Rybandt says, “I’ve long been a fan of Warren, going back to his earliest works (for instance, Lazarus Churchyard when it was first published), and pairing his creative mind with the iconic James Bond will make it the most talked about and exciting comic of 2015.”

“We have the extraordinary opportunity to create the very best James Bond stories that you’ve never read, and we have one of the most extraordinary contemporary adventure writers in the world to launch with,” says Editor Mike Lake. “After more than 40 years in the business, this is the best project I’ve ever had a hand in, and am very proud to have helped bring it about.”

“I’ve wanted to draw something Warren Ellis wrote since I first read his work on The Authority,” says artist Jason Masters. “Each of his carefully composed pages is filled with wonderful ideas that make you wish you were smarter. More ingenious than Warren’s writing might be Dynamite’s decision to have him write James Bond. James Bond by Warren Ellis! I’d buy that sight unseen if I wasn’t lucky enough to be the guy drawing it.”

Kind of a match made in heaven all around then? Oddly enough, before this deal was inked between Dynamite Comics and Fleming Publications Ltd., Bond hadn’t been featured in a comic book in 20+ years. That’s an awfully long time for a character that’s really one of the best known in the world and a star of two dozen (including the upcoming Spectre) big budget action films, all of which have done pretty darn well at the box office.

That all changes now though, as Dynamite now has the rights to publish Bond comics on a global scale, and that includes digital comics as well as physical ones, and graphic novels. And with a major name like Ellis on board right from the start, it certainly looks as thought the publisher is taking the license seriously, and that fans should have something to very much look forward to every month.

Kicking off in November, James Bond 007 will be featured in digital apps, as well as be distributed through Diamond Comics for shipping to your local comics shop.