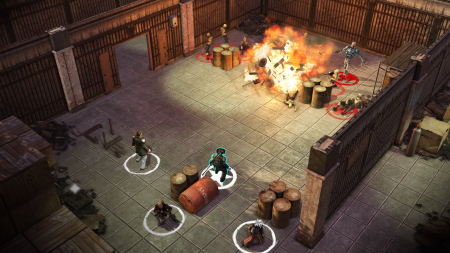 The grandfather of the post-apocalyptic, wasteland-set RPG, Wasteland finally got a sequel last year that landed on the PC after a successful Kickstarter campaign. And now it’s on the way to consoles with Wasteland 2: Director’s Cut.

This is no simple port either, as the game is getting a near-complete overhaul for console gamers including “a more sophisticated lighting system, upgraded environments and improved textures as well as brand new, higher quality character models.” You can also expect to see some non-visual upgrades in the way of new character voices and weapon sounds, so it’ll be a treat for your ears too.

On the technical side of things, you can also expect to experience new balancing to the game overall, as well as a new UI that’s been designed just for consoles, and some all-new in-game elements with the Precision Strike and Perk & Traits systems.

Related Article:  Xbox One will be getting Mouse support sometime soonish

Lots of ‘new’ here for longtime fans to sink their teeth into one more time, or for first time players to get acquainted with.

Here’s the full list of what’s on tap for the Director’s Cut:

Ready to head back to the wasteland? Wasteland 2: Director’s Cut will be shown off at the upcoming Gamescom show and arrives on the Xbox One and PS4 soon after, hitting retail on October 13th in both physical boxed and digital download editions.

Surprise- GTAV on current-gen consoles has a FPS mode