Kickstarter might not have the greatest record in the eyes of fans, but with We Happy Few getting funded, at least there are a few feathers in its cap. 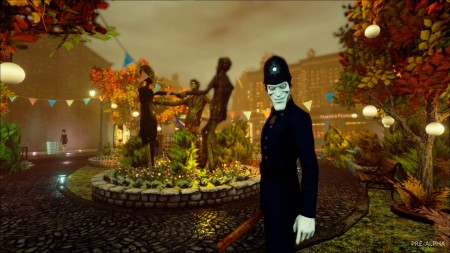 One of the strangest (and best) looking new games in development right now, We Happy Few is officially on the way to retail. The game follows a strange drug-addled and pacified culture, where you pay one of the lone holdouts willing to go against the system, and it looks terrific.

We profiled the game a while back here on BG and were pretty taken with the designs as well as the promise that the game holds. There’s not too much like it out there, in looks or theme, after all.

From developer Compulsion Games, We Happy Few features a procedurally generated world to play in, that changes every time you restart. You’ll also find a crafting system to help you make some weaponry, and something called the Suspicion System.

Since the storyline of the game revolves around being stuck in a drugged society that wants nothing to do with anyone who would see the world for what is really is (they call people like that Downers), the ‘happy’ residents of Wellington Wells are understandably wary of anyone who might not fit in. In that way, they’ll all expect you too act a certain way, as though you’re on their drug of choice ‘Joy’. And if you don’t, well, you’ll rouse their suspicion and they’re really not going to react in the best possible way.

There’s so much here to like, and with the goal of the Kickstarter being hit at an excess of CAD $250,000 with around 5800 backers, it’s finally on the way. Now, there’s more of course if the cash allotment goes ever-higher. a Sandbox mode, as well as more story elements like the ‘Uncle Jack’ show and the ability to play as a member of the community (Wellies) are all possible. That’ll take more time and more cash to do though.

Related Article:  The Virtuous Cycle DLC will be free to claim for five days

So if you haven’t backed the game yet, and you’re itching to play We Happy Few with all the bells and whistles, then you might want to get over to the Kickstarter page before time runs out in a few scant days. As a nice bonus too, you’ll get access to a pre-alpha build of the game if you back it. And that goes into availability as soon as the campaign ends, so you could be playing a version of this one very soon (July 5th) if you back it.