Dig that? then you’re also going to watch this next video. It’s a behind the scenes look at The Witches (that’s the short shown above), complete with interviews with the dudes behind the short at Six Point Harness and Roth himself, who’s a fan of the series.

Check it out below, and remember that Dark Souls III lands on the PS4, Xbox One, and PC on April 12th. 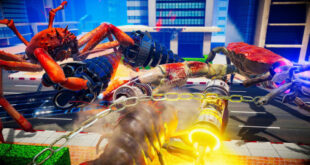 Lots of smaller releases hitting the Switch this week, including some gems like Adventures of …