A brand new title from Heroclix-makers WizKids, X-Men: Mutant Revolution spread the mutant cause in Marvel’s universe in the wake of the Phoenix event. 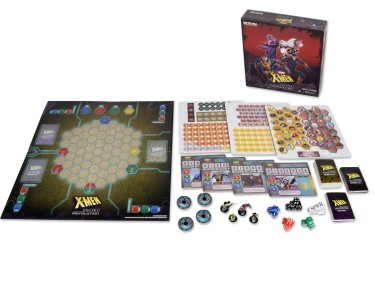 A board game in the truest sense, which is kind of unusual for Heroclix if I remember the line correctly, Mutant Revolution fits right in with fairly current events in the Marvel U. Picking up right after the Phoenix event, and based on the Spartacus: A Game of Blood and Treachery ruleset, the game stars four of the X-Men’s most famous characters as they all try and spread their own Mutant cause across the world.

For three to four players, you’ll recruit a whole bunch of other Marvel characters into your group to battle your rivals in Mutant Revolution. It’ll be up to you to train each team member too, and send them out on missions as you see fit in this strategy title.

Specifics on the game and play are below for your perusal, X-Men: Mutant Revolution is available now.

Game Overview:
In the aftermath of the Phoenix event, new mutants are appearing all over the Earth. Wolverine, Cyclops, Magneto, and Storm each have a vision for the future, but will they unite humans with mutants, or will they tear the world apart?

Episode 66: Game of the Year Discussions