Wolvie and Sabertooth continue on their collision course in the latest issue of Wolverine: Japan’s Most Wanted. 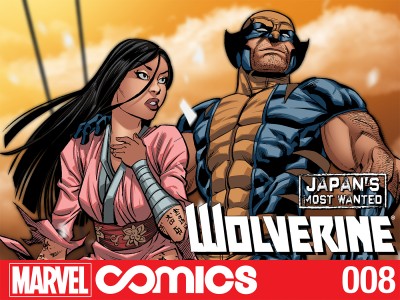 Silver Samurai, Sunfire and the Hand ninja’s were threats enough for Wolverine, but now we get the full on appearance of the Canadian Berserker’s number one thorn- Sabertooth in all his glory. Personally, I can’t get enough of Creed. He’s easily one of the coolest villains in the Marvel U and one of my favorites in all of comic-dom.

This time around, ‘Tooth has a much bigger plan in mind than just making Logan’s life an exercise in pain and suffering.

The battles with Silver Samurai and Sunfire behind him, an exhausted Wolverine continues his hunt for Sabretooth. But Logan will have to move fast, as Sabretooth advances his cunning coup to the next shocking stage!

As Wolverine and Sabretooth hurtle towards their climatic confrontation, what new secrets could make their lifelong rivalry even bloodier? Find out today, as the truth cuts deeper than any other wound! See the next stunning twist by downloading one of the hottest digital comics series’ available!

Marvel digs up Logan’s past in Wolverine: Origin II