With the dawn of Legacy, we all know that the one and only Logan is back. Just where he’s been since however, is a mystery. Well, get ready for some answers.

The old canucklehead has always been something of an enigma. For a good long time, he didn’t even really have a history in Marvel’s comic universe. He was a man without a past, and what both he and we knew of it was bloody and violent. Not that that’s the case anymore, as Wolvie’s history has been laid bare. Maybe that’s why Marvel is injecting a little haze back into him. 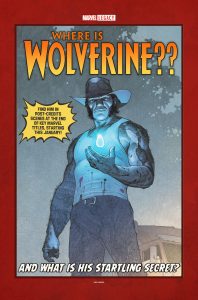 “Fans have been speculating about Wolverine’s whereabouts since he first reappeared in MARVEL LEGACY #1—and the Marvel Universe is left just as unaware!” teased SVP and Executive Editor Tom Brevoort. “So keep your eyes peeled as Canada’s favorite citizen makes his presence felt in titles all across the Marvel line! It’s all leading to something—but what?”

“Mystery has always been part of Wolverine’s DNA,” added senior editor Mark Paniccia. “He’s one of Marvel’s most interesting and popular characters. Fans are going to have a helluva ride finding out where he’s been and how he came back.”

While that’s cool and all, it’s even neater how Marvel is going to reveal what’s Wolverine has been up to. Namely, Logan will be appearing in a series of “after credits” scenes in select comics.

Till the bitter end

That’s right, just like in the Marvel movies, the publisher’s January books will have a series of post-ending scenes. These bonus pages will follow Logan, through one inter-connected story.

Just what will be revealed in that mini-tale has yet to even be hinted at. But we do know that, at its conclusion, we’ll know a heck of a lot more about just what’s been afoot. Or, a-claw, as the case may be.

Here’s the list of Wolverine-including titles, as it stands right now: