The newst member of The Wonderful 101, Wonder-Green, has been unveiled. 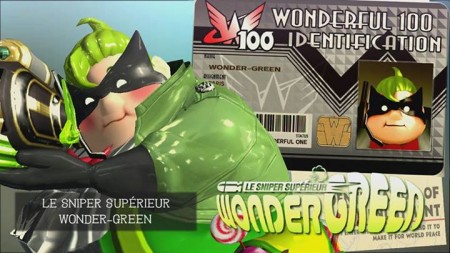 Green’s signature attack is “unite gun” which creates a giant gun that fires Wonderful 101 members as bullets at the enemy. This portly little guy is just one of many heroes gradually introduced over time, as we inch ever closer to the release date of The Wonderful 101. Platinum Games and Nintendo seem quite vigilant in advertising the upcoming title, as there has been quite a lot of coverage devoted to it. With a blog devoted to Wonderful 101, combined with an upcoming Nintendo Direct centered around the title, they’ve given fans quite a lot to chew on this month.

The Wonderful 101 is an action game where you control large team of heroes as they battle their way through hordes of enemies, bosses, and obstacles. What is perhaps the most attractive feature of this game is the famous “unite morph” abilities that the characters possess. They can merge several of members of the team into multitudinous amounts of weapons, such as a giant fist, gun, sword, whip, etc. and use these powers to take down bosses, rescue townsfolk, and overcome obstacles. Wonderful 101 will be released for the Wii U on August 23rd in Japan, August 24th in Europe, and September 15th in North America.
Source: GoNintendo

Related Article:  It’s a Warhammer 40k kind of weekend with a sale and Kill Team debut

Legends of Runeterra Patch 1.5 update and the debut of Labs