The Valiant Universe’s heaviest hitters team up to take on one very angry X-O Manowar in this double dose preview. 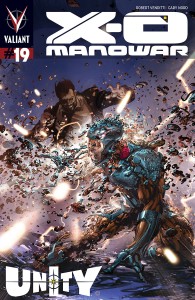 Yes, we know we left out an issue in the middle there, but Valiant Comics shared a pair of previews with us today- and both are big time for X-O fans.

In X-O Manowar #17, the victorious Aric returns to Romania and quickly sets up a new homeland for the formerly alien-abducted Visigoth people. Dissension however, is very much something that he’s going to have to keep an eye on as it’s already begun in a people who don’t necessarily trust their new/old King.

The road to UNITY continues here! With the might of a military occupation, X-O Manowar has forged a new nation state for the Visigoth people inside of modern day Romania. But his actions will not go unnoticed – or unpunished – by a world on red alert…

Since bonding with the sentient X-O Manowar armor, Aric of Dacia has rampaged unchecked, crushing every enemy in his path. But what happens when a one-man war machine must become the protector of an entire people? Aric’s skills as ruler are about to be put to the test, and the result will set off a chain reaction that will lead to one of the biggest confrontations in the history of the Valiant Universe – UNITY!

Issue #17 arrives in stores this week (September 18th) and comes from Robert Venditti and Lee Garbit with a story that’ll run through X-O #18 and lead right into Unity and X-O Manowar #19.

Exploding out of the pages of UNITY #1, start reading here as X-O Manowar goes head-to-head against the united forces of Valiant’s first-ever super team! Aric of Dacia has fought to reclaim the ancestral lands of the Visigoths – and he has bled for it. But nothing he has faced before can prepare him for the combined might of UNITY – and the deadly combination of Toyo Harada, Ninjak, Eternal Warrior and Livewire!

As a comic fan, I’m in for big time crossover events. There’s just something about the whole feel of a huge crossover that’s, well- huge. And as crossover’s go, this is a big one.

Valiant’s first event of this size, Unity kicks off in X-O Manowar #19 and teams four of the comic universe’s most powerful characters in a bid to take down a man they all fear in X-O Manowar, Aric of Dacia. The team isn’t just heroic characters either as Toyo Harada (the VU’s biggest threat) is leading the charge… though that’s mainly because he can’t really stop Aric on his own and he’s a little spooked by the big guy.

X-O Manowar #19 comes once again from the mind of Robert Venditti and features the pencils of none other than Cary Nord, who’s worked on the entirety of the book’s interiors in spectacular fashion- though you don’t have to believe me. Just scroll down and check out the preview images below for a sneak peek at the book, right under the series of preview images for issue 17- I dare you not to get excited about this one.