The force that is Dead Hand is on the move, and ready to strike at Aric, but he and his new army stand in their way. 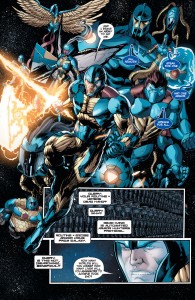 Settled just behind Mars, Dead Hand sits idle in range of Earth. Facing it is the wearer of Shanhara, Aric of Dacia, and his new army. Assembled from the various wearers of sentient armor across the galaxy, Aric’s squad hails him as king, and works with one mind.

There’s a massive difference between how these armored organic beings act and how Aric acts though. He’s still himself, with no loss of identity, while the rest of them are fused beings, and a part of a hive mind. Joined up under him though, they’re a mean fighting force.

I have to hand it to writer Robert Venditti here, the Dead Hand arc has been an exciting one, loaded up with new content for the Valiant Universe that should have some long-lasting ramifications. Here in the ultimate chapter of the storyline, we learn a few pretty big items, most of which I won’t spoil here.

What I will tell you though is that it certainly looks as though there might be a kind of ‘armor corps’ forming that X-O Manowar might be able to call on down the line, each one with its own planet to protect. Any long time fan of comics in general should be instantly reminded of DC Comics’ Green Lantern Corps with that statement, but that’s only half the story.

There are a few pretty big differences, but mainly that’s because there’s still a ton and a half that we don’t know about Shanhara and the rest of the armors that bear her likeness. While the Vine’s involvement with her is well-documented, that’s still about it for what we know, outside of her origin. What happened to the civilization that created her and the rest though, that’s a mystery.

Meanwhile, the Armor Hunters/Dead Hand element rolls on, ever evolving as you’ll learn here in X-O #37. There isn’t a ton of recap here though, so if you’re new to the series, you’ll need to go back and grab the first three issues to know what’s happening. Honestly, you probably should anyway, because they were all pretty fun.

And they’re nice looking too with the talented pencils of Diego Bernard bringing the action to life. Bernard’s work is excellently comic-booky in tone and form, with big and splash visuals painted against the blackness of space and the cold interior of a Dead Hand instillation. There are some Earth-based segments as well in this one, but the vast majority of the story takes place in the Final Frontier, and it all looks great.

I liked this issue a lot, but it’s not quite the mind-blowing capper that I had thought we were heading towards with Dead Hand. That’s not to say it’s disappointing, just a slightly ‘smaller’ issue story-wise than I had envisioned.

Aric is such a great character though, that it’s still tons of fun and, again, looks great thanks to Bernard. I also liked the not-so little Star Wars Easter Egg. You’ll know it when you see it. Whether you’re a new fan just following along with this new arc (that’s just closed with this issue), or a big Valiant follower though, this probably isn’t an issue that should be missed.

Though it’s not an Earth-shaker, it does intro several new elements that just may play a big part in Valiant lore to come.