The Dead Hand are coming to the Valiant U. 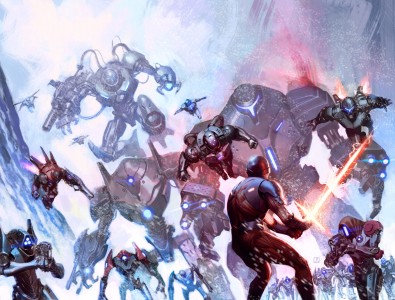 I’m sure you immediately thought of zombies when you read that intro line, but what’s on the way to X-O isn’t of the rotting variety, it’s more like cold, unfeeling metal. And that’s because Dead Hand is a robot army, one that was created by a now long-dead civilization and has been awakened. With their masters gone, their goal is to simply cleanse the universe. And they take their job very seriously.

“DEAD HAND is going to take the mythology surrounding the X-O Manowar armor, and the entire Valiant Universe, in a direction not seen before,” said writer Robert Venditti. “As formidable as the adversaries in the series have been to date, none of them measure up to this single-minded, doomsday threat. X-O Manowar has made a habit of taking what readers expect and turning it on its head. We’ve challenged ourselves to do that again.”

“Last summer, X-O Manowar went up against the Armor Hunters for a full-metal throwdown between Earth and alien life. Well, we won the battle, but that doesn’t mean we’ve won the war,” said Valiant Editor-in-Chief Warren Simons. “Somewhere out there, something colder, grimmer, and more calculating is about to come online. And it won’t concede that war, even in death. An extinct world has saved a nasty treat for the Valiant U – something insanely effective that could only exist in the wake of their failure – a dead hand. Venditti’s cooked up a good one, folks.”

Sounds like it. X-O is one of the most entertaining superhero books on the racks and consistently one of the best comics that Valiant has in its pretty fantastic stable. It’s had no shortage of big events either, as Armor Hunters, The Vine, and Unity all played out in X-O’s pages. And with Valiant and writer Robert Venditti selling Dead Hand as the biggest threat that the character has ever faced, well, that’s no small talk.

The new arc kicks off in the “fallout” of the Armorines storyline that’s currently raging in the X-O monthly, and is scheduled to begin on March 4th.